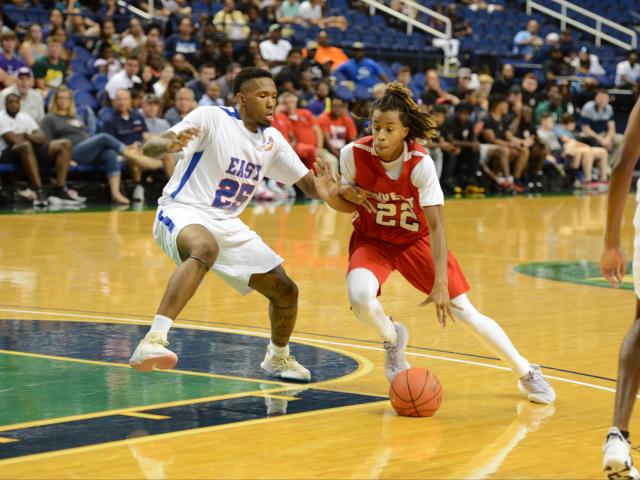 After a quick start, the West barely held on to a 92-90 win over the East in the NCCA Boys Basketball All-Star Game at Greensboro Coliseum on Monday.

“They had a bigger squad, so we were just planning to get the ball out in transition and run a lot,” Shaw said. “I love it. We always play against each other on the west side, so we knew there was something special. We just came to play.”

At first it looked like it could be a blast as West exploded for 30 points in the first quarter, taking a 30-16 lead late in the period. But the East managed to hang on in the second quarter and stay within striking distance at 52-39 at halftime.

And West struck, beating East 27-17 in the third quarter to make it a one-possession game at 69-66 heading into the final period.

With 2:04 remaining in the fourth quarter, Fisher gave the East its first lead of the second half with a 3-pointer from right wing to make it 86-85. But Frazier lost a few possessions later and responded with a triple to retake the West lead 88-86 with 1:32 remaining.

As the game ended on the wire, a missed East lay-up resulted in a fast break ending for Crawford to push the West lead to 92-88 with around 10 seconds to go. Harkins quickly pushed the transition for a layup to cut the deficit to two at 92-90 with 3.2 seconds remaining. Then, after time out, the 6ft 8in Ellingsworth used his long arms to steal the incoming pass and was fouled on a layup attempt, giving him two shots down the line to equalize the match with 0.1 seconds on the clock. However, his first attempt failed, forcing him to intentionally miss the second in hopes of a comeback, which failed.