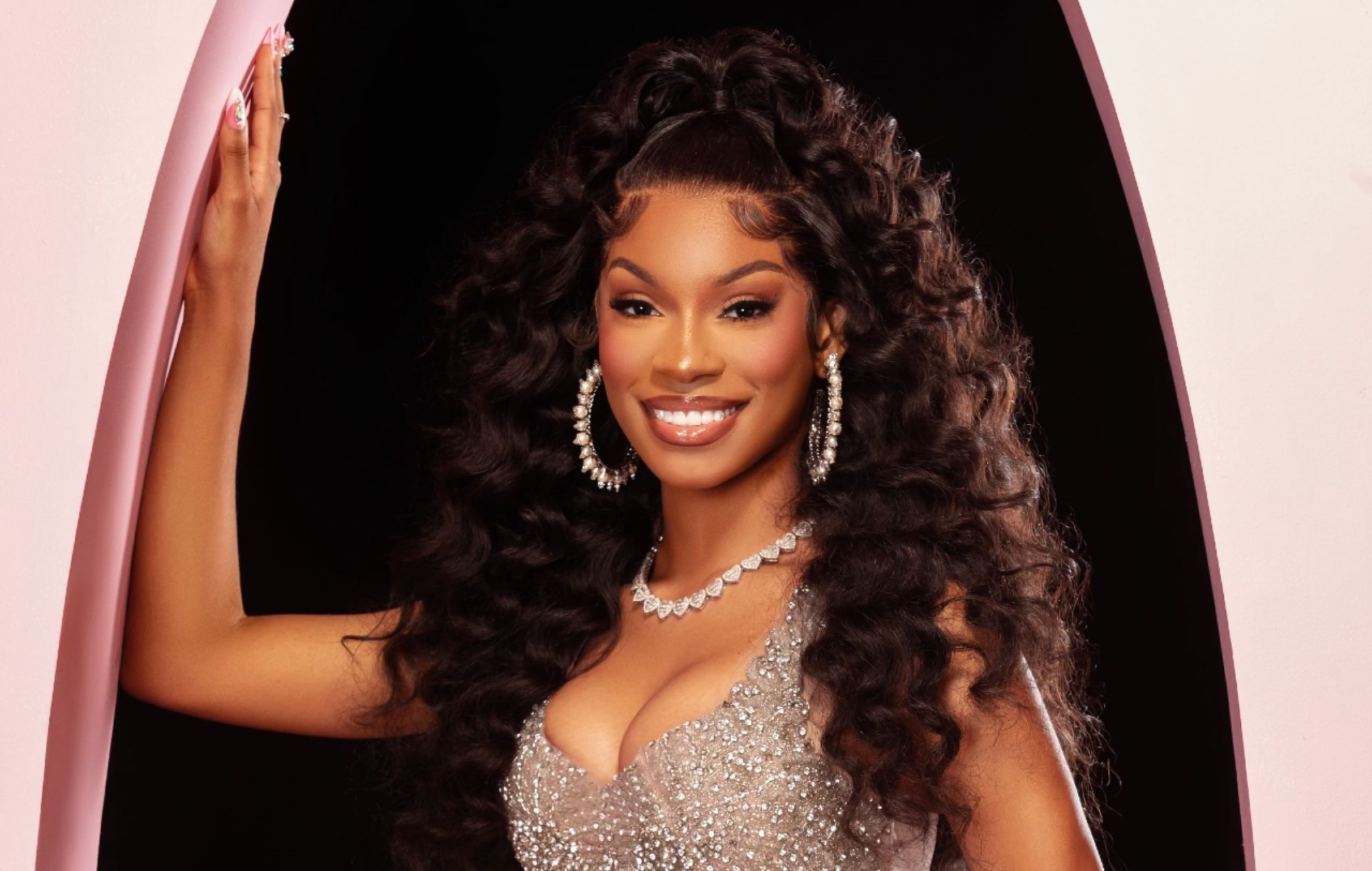 Viral superstar Monaleo is becoming a force to be reckoned with. An exciting and refreshing addition to Houston’s famous rap scene (home to Megan Thee Stallion and Don Toliver, among others), the 21-year-old found major success in April thanks to the remix with Flo Milli of her 2021 track “We Don’t Jump’ The soundtrack to the summer of townswomen, the two rappers follow one another with a lively lyricism that embraces the role of the rejecter. “Put that dick in the air, we don’t work‘,” Monaleo says over bass-heavy beats. “Sky Zone, bitch, my block jumps / Jumps off the black truck, we start dumping / In the field with a hundred bands, no trumpet.

It was Monaleo’s younger brother, rapper Yung Rampage, who first encouraged her to give it a shot after a few studio sessions together in 2020. The overwhelmingly positive response to the few Instagram clips the couple shared of their work – which have since been removed – urged Monaleo to take it to the next level, which led to the creation of its February 2021 breakout hit “Beating Down Yo Block”. After catching the internet’s attention with this track and its December follow-up “We Not Humping,” Monaleo’s TikTok fanbase swelled, reaching more than six million likes on its page.

However, she didn’t let those giant numbers go to her head. Having been open about her own struggles with anxiety, Monaleo instead wants to use her platform to advocate for mental health awareness in the music industry. “My mental health is something I deal with on a daily basis,” she says NME on Zoom from his Houston home. “So I want to make sure that I manage myself and my story carefully, so when the time is right I can attack it.”

Our interview with Monaleo was sandwiched in a typically busy week for the artist, which also includes new video shoot and studio sessions for his debut album. Monaleo’s passion for her art, however, shines through the Zoom window, exuding the “real, raw and authentic” self that she plans to continue revealing to her fans as her career progresses.

NME caught up with the rising star to discuss her viral collaboration (and newfound friendship) with Flo Milli, her plans to continue her mental health advocacy through her music, and how she feels about join the next generation of bold, multifaceted women in rap.

What were your dreams when you started as an artist?

“I wanted to be a singer. When I was young, my grandmother made me sing in church, but I hated people staring at me — I loved to sing. I knew I had to decide what I wanted to do: I didn’t want to go to college, but everyone expected it because I was smart, so I went and changed my mind a lot. major. I was preparing to major in computer engineering, but by then my raps were starting to have a lot of success, so I was like, ‘OK, is this the time? Is it getting ready?’ I stopped going to school and focused on music, and it worked.

“You have these dreams and fantasies where you can visualize yourself doing something, but when it starts to happen, it’s a surreal experience. I couldn’t believe it was happening, and as quickly as it was .

Was rap initially a secondary activity, then?

“[Rapping] didn’t pay me anything: it was draining my funds, to be honest, but it was slow progress. I would post a video and it would get 400 likes, so [post] another that would get 900. Once the response was bigger, I figured it was something I could continue, but only because I was seeing results. It is easier to do something that is rewarding. I was watching my follower count grow and I could easily gauge whether or not people were receptive to my art, so being able to see my follower count grow was a catalyst for me to focus on being an artist. full time.

Why is your creative relationship with Flo Milli working so well?

“The experience of working with her was very authentic and pure. It started as a simple DM on Twitter: I sent her ‘We Not Humping’ before it came out and wanted her to be there. I appreciate her talent artistic and I think she’s extremely talented. She’s beautiful and gives off that energy that’s channeled into our song. Her energy was very contagious; she was receptive and warm. She didn’t give me those “low-key bullied” vibes. , nothing like it. We recorded the back and forth at the start of the song, and we were laughing, having kicks. It was wonderful.”

The ‘We Not Humping’ remix video is very conceptual. What was filming like?

“We originally shot another video before this one, and I hated it. We were on set for 22 hours and it was super exhausting. I told Flo I wanted to do it again, saying: ‘I’m even sorry to say this but I got the video back and I don’t like it Our skin tones aren’t the best we look muddy’ Being black girls I wanted to be frank and our beauty transferred to the camera, and I felt like the original video didn’t do what it was supposed to do. I didn’t want to be too demanding, but it was one of those things on which I had to be honest. Flo was super understanding and supportive throughout the process. Even though she’s a great artist, being receptive to my artistic talent was so fulfilling for her. We became friends: she m gave me a present for my birthday, we texted and got together. It’s a real friendship that e was born out of making a song together.

“It’s my life, my narrative – something I have full control over. It’s the part of being an independent artist that I love.

It looks like the final video came from you putting your foot down and asserting your creative control. But do you sometimes feel like you can’t speak or are “demanding”?

“I’ve definitely had times where I thought, ‘Is this my thing to say or should I just be grateful? “. But then I realize I’m not that person. If something happens that I don’t like, I’ll say so. It’s my life, my story – something I have full control over. . That’s the part of being an independent artist that I love. I had to make the tough decision to say, ‘Let’s start over, get back to the drawing board and make it a while.’ the video back and say, “I hated that. It would have been a waste of time and effort. It made sense to do it again and make the most of the moment.

Do you think your drive to be so open is the reason people connect with your work?

“I think my music resonates with everyday people. Yes, being an artist allows me to pay the bills, but I also want to take care of myself and my mental health, so I figured that in order to do both, I had to be open about what I was going through. If there’s a day when I wake up and I’m not feeling in the mood, I’ll say so. I don’t care who has anything to say about it; I won’t be made out to be a robot with no feelings.

“Frankly speaking, it also feels good to be validated. I had to deal with a feeling of invalidation for a long time, and it can hurt your mind and your outlook on life. I’m not saying that you have to do things to be validated, but there is power in solidarity. Knowing that people had been through what I had been through was uplifting. I created a space that allowed me to freely share my experience with people who wanted to understand me.

You recently performed live at Rolling Loud in Miami. Did you have a specific routine to help calm your anxiety?

“I still have a lot of trouble acclimatizing [to performing live]. The last show I had was one of my best because I was honest with people. For example, Summer Walker and I have a lot of similarities in how we deal with our anxieties. I remember when she canceled her tour and was like, ‘That’s something I would do.

“I understood why Summer felt like this and how overwhelming it can be to exchange energies with different people you don’t know. Seeing the amount of angst she felt and the chaos that ensued after the decision she made based on what she felt scared me I want to be able to spark a conversation on stage and engage with the audience without feeling overwhelmed by being the center of attention, which has always bothered me.

What type of artist do you want us to remember?

“I would like to be remembered as a fearless artist: someone who used my situation as a stepping stone to be a voice for people who have been through similar things. Ultimately, I want to be happy, but I don’t want to tie my happiness to anything tangible or materialistic. When your heart is happy, everything around you is harmonious – everything works.