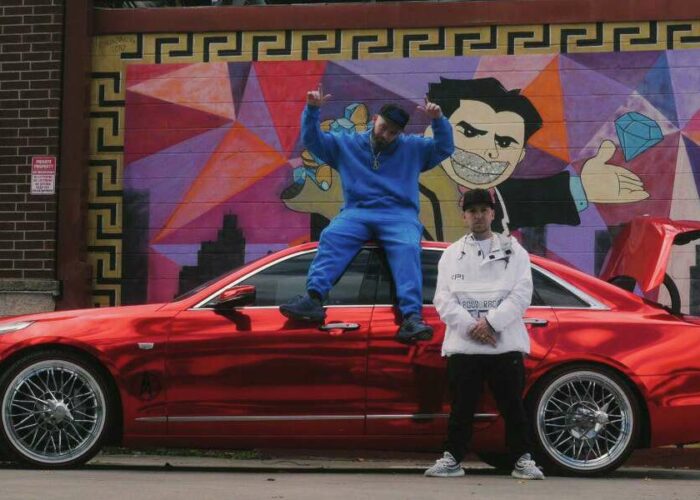 Paul Wall can’t escape Houston. Even when he’s not there.

The rapper and grillz connoisseur is in NYC to promote new album “Start 2 Finish.” He’s a passenger with rapper and East Coast contributor Termanology as they cross Montrose and Bushwick Avenues in Brooklyn.

Wall immediately makes the connection with Houston: Montrose, the street in Houston not far from his home; and Bushwick, as in Bill, the late Geto Boys rapper.

“This is fucking crazy,” Wall said.

Despite releasing dozens of solo albums, collaborative projects and mixtapes, Wall continues to push himself and is a tireless champion of Houston and its vibrant rap community. He joined nearly two dozen artists last month for Bun B’s H-Town Takeover at RodeoHouston, attracting more than 73,000 fans.

That same night, he celebrated a birthday on stage alongside former Destiny’s Child member LeToya Luckett.

“The totality, I haven’t understood yet,” he says. “I don’t usually celebrate my birthday. Having my birthday celebrated by other people was great.

He has linked up on leads this year with Trae Tha Truth, jeweler Johnny Dang and is featured in blockchain gaming platform Meta Wizards. But “Start 2 Finish” with Termanology is a priority for Wall. The album was released this month and features production from Statik Selektah and the legendary Pete Rock. Also included are Bun B and Millyz.

Wall and Termanology met in 2019 and soon worked together on projects for Statik Selektah and Rock. Termanology says it was an instant spark, “just naturally clicking one rapper’s appreciation to another for bars-like stuff,” says Termanology.

They started working on “Start 2 Finish” at the start of the COVID-19 pandemic and really took their time to create a fully realized project. It went so well that they are already working on a second album.

“It was really just a lot of doping,” Wall says. “It’s different from a lot of my other albums. I don’t know if it’s the organic, natural process of recording. We’re so happy about it. It’s just motivating for us.

Wall adopts a whole new delivery on “Start 2 Finish” to make the album as authentically NYC as possible. Boom bap, to be precise, is an East Coast subgenre that showcases bass and snare drums. Wall’s delivery is more relaxed against a backdrop of horns and gritty production on standout tracks “Recognize My Car” and “Ask Permission.” It’s a nice counterpoint to Termanology’s ease with sound.

“The greatest were either from that era or inspired by that era,” Wall says of the pioneering sound popularized by DJ Premier, Run-DMC and LL Cool J. “Growing up representing a style of music from Houston, people can enjoy it. But I get told all the time, ‘Boom bap is always the best. You’ll never be as good as you could be until you go boom bap.’

Termanology, whose first name is Daniel Carrillo and who released his debut album in 2008 as well as once collaborated on a remix with Christina Aguilera, says he’s in turn refreshed that H-Town sound. Wall hinted that the pair were also working on a chop and screw album, with the “normal speed” version to be released later.

“I’ve been a fan of Houston rap—Bun B, Devin the Dude, Scarface—but I had to learn what I’m talking about. I don’t want to be misinformed or misrepresent Paul,” says Termanology. I had to learn the chopped and the screwed, the syrup, the rims that come out.”

It would be easy for Wall, at this point, to rest easy and ride a wave of goodwill and nostalgia. His album “The People’s Champ” spawned a string of hit singles. He earned a Grammy nomination alongside Nelly for “Grillz.” He appeared in films and cemented his reputation as Houston’s beloved hero.

But he hasn’t finished yet. And he turns to a pair of musical icons for continued inspiration.

“I’ve always tried to think of myself as an artist. I don’t mean, like, recording artist. I mean, genre, art. The art of creating hip-hop,” says Wall. “I always considered Willie Nelson as someone I could look up to. He never compromises his integrity. He’s evolved with the times, but he still has that core when he releases his music. Same for Snoop Dogg. Any record he puts out is Snoop Dogg. He can go down these different rabbit holes because there are so many sides to who Snoop Dogg is. I try 100% to do so.