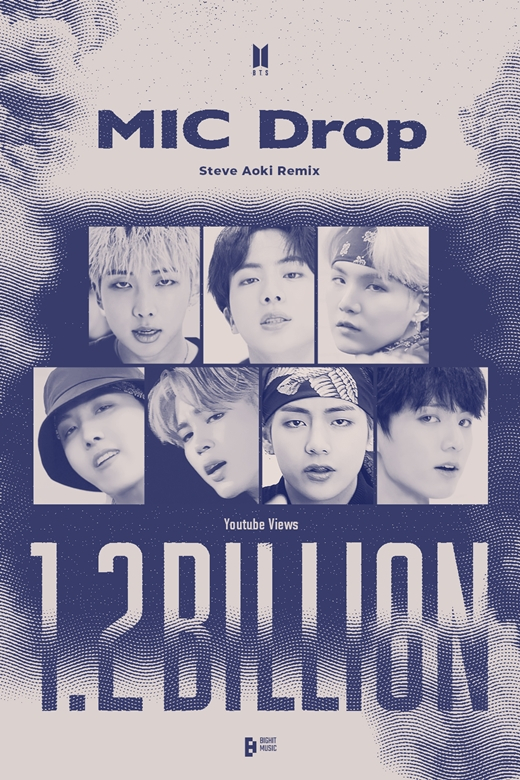 According to Big Hit Music Thursday, the music video released in November 2017 topped the record on Wednesday morning.

“MIC Drop (Steve Aoki Remix)” is a remix version of the song by DJ Steve Aoki. The original song was part of the EP “Love Yourself: Her” (2017).

Steve Aoki and BTS appear together in the video, featuring a colorful performance by the group with unique and powerful beats added by the DJ. The scene in which Suga drops his microphone near the end of the video has gone viral online.

BTS currently has 37 videos with over 1 million views. The music video for “Boy With Luv” (2019) retains the most views with 1.5 billion.

According to Shazam, the global music search engine platform, on May 31, Jin’s “Yours” and V’s “Christmas Tree” ranked No. 1 and 2 in the Global Top 200. This is the first time that a Korean solo artist has topped the chart.

Meanwhile, BTS was scheduled to return to Korea on Thursday, after visiting the White House for a meeting with President Joe Biden, to prepare for the release of their album “Proof” on June 10.

It is said to be an anthology album that compiles nine years of BTS discography. According to the track listings that have been released, the album will include a remastered version of the previously unreleased 2013 track “Born Singer”, a new song titled “Run BTS” (translated) and the acapella version of Jungkook’s “Still With You”. ( 2020).