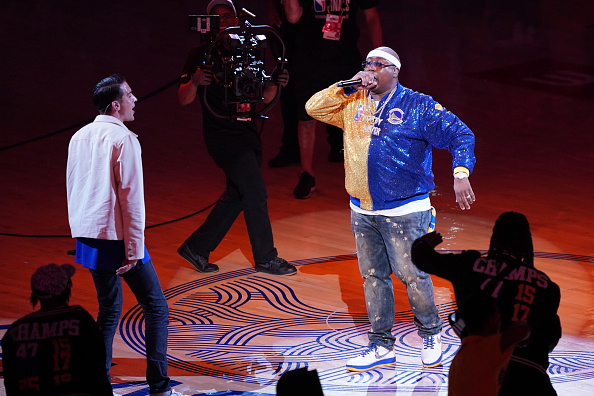 The Bay Area is ready to go “hyphy”. It’s only fitting to celebrate with Bay Area hip-hop and Warriors-themed anthems.

To get Warriors fans excited for Monday’s festivities, here’s a list of those songs. All of these songs are by Bay Area artists including E-40 (Vallejo), Too $hort (Oakland), G-Eazy (Oakland), Kehlani (Oakland), and P-Lo (Pinole).

Note: Most of the songs mentioned have explicit lyrics.

The streak continues: Kendrick Lamar abandons his album, the Warriors win the title the same year

“Champion” by Kehlani, G-Eazy, Lil B and Iamsu!

To celebrate the Warriors’ 2015 title, these Bay Area artists came together to create an anthem to celebrate the franchise’s first championship in 40 years. There were many references to Stephen Curry, Klay Thompson, Draymond Green and Andre Iguodala.

Remember Draymond Green’s memorable interview with Ros Gold-Onwude at the 2015 show? Yeah, it was in reference to that E-40 song. The original version was released before the Warriors defeated the Cavaliers in the Finals that year, but E-40 later remixed it with references to the 2015 team members.

Released in 2022, rapper Stunnaman02 remixed his hit “Big Steppin'” in honor of the team, including references to new Warriors members like Jordan Poole and Andrew Wiggins. “They call him Jordan Poole because his sweater is wet,” raps Stunnaman02, also known as Jordan Gomes. He attended the preparation of the Cathedral of the Sacred Heart in San Francisco.

Although this song was released in 2006 on E-40’s “My Ghetto Report Card” album, the song resurfaced 10 years later in a Beats commercial featuring Draymond Green. The commercial also included Hall of Famer and Oakland native Gary Payton.

Louis Theroux reacts by becoming a rap superstar at 52