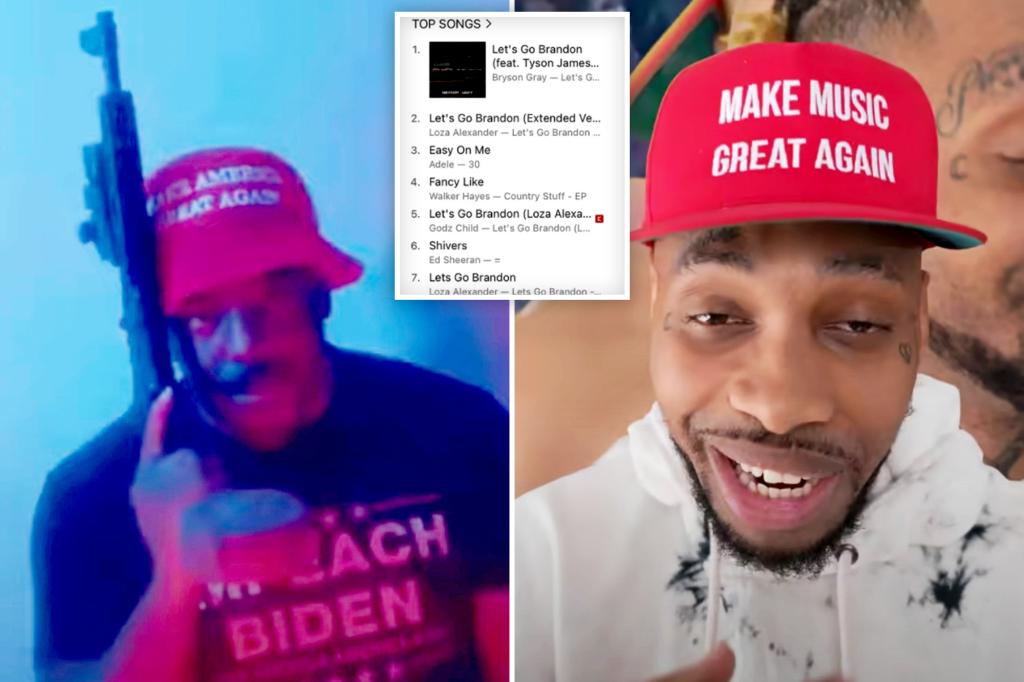 What started as a chart-topping anti-Biden hip-hop anthem quadrupled into four iTunes Top 10 hit tracks on Friday, as conservatives flocked to buy the tracks and prove their buying power.

The four songs are titled “Let’s Go Brandon” – a phrase that has become a right-wing rallying cry in recent weeks.

The phrase originated at a NASCAR race in Alabama on October 2. At the event, crowds were filmed chanting ‘F–k Joe Biden’, but an NBC presenter insisted they were actually chanting ‘Let’s Go Brandon’ – in reference to a victory of pilot Brandon Brown.

“Let’s Go Brandon” began trending on Twitter, with some on the right claiming NBC was involved in a cover-up by refusing to allow any criticism of the president on their network. The phrase has now been co-opted by conservatives, with several rappers creating tracks to troll Democrats.

Now right-wing social media pundits urge Republicans to buy the songs and send them to the charts in order to raise a metaphorical middle finger to leftists, they accuse of censorship and cultural control.

As of Friday morning, rapper Bryson Gray’s track “Let’s Go Brandon” was still perched at No. 1 on iTunes, a position it has held solidly since Sunday.

The track was banned from YouTube and Instagram for spreading “harmful false information” about COVID-19 because it features the line: “The pandemic isn’t real / they just planned it”.

Gray told the Post that he thinks the song shot to No. 1 because of the ban: “Cancel culture doesn’t work anymore. It only works on people who are scared…all it does is help me. Thank you YouTube!” the North Carolina-born rapper cheekily declared.

The 30-year-old musician also claimed that big tech discriminates against Republicans, unfairly censoring them for their political beliefs while those on the left can say whatever they want.

Meanwhile, a different track by Loza Alexander — also titled “Let’s Go Brandon” — takes No. 2 on the iTunes chart. (BTW: Gray told The Post on Friday that he’s not worried about his newfound competition: “Nobody’s stealing my vibe. I love it. I’m not the first to do the either. [‘Let’s Go Brandon’] song, I happen to have gone to No. 1.”)

Alexander’s song features the lyrics: “That’s what they get for treating us like us in Squid Games/Green light, mandate like he’s crazy/These times people wake up with everything.”

The rap’s chorus simply repeats the lines “Let’s go Brandon/ F––k Joe Biden.” This track has not been banned from YouTube.

Alexander – a New Jersey-based rapper – took to Twitter earlier this week to thank conservative fans for sending the song to the charts.

“Congratulations! Couldn’t buy your song fast enough. Easy to support the truth! Keep up the good work,” cooed a fan.

Gray and Alexander’s versions of “Let’s Go, Brandon” beat out Adele’s new track, “Easy on Me,” which currently sits at No. 3, along with new music from Ed Sheeran and Yung Miami.

Meanwhile, two remixes of Alexander’s rap — both also titled “Let’s Go Brandon” — sit at No. 5 and No. 7 on the iTunes charts, to date, respectively.

So with all this newfound mainstream fame and chart success, is Gray getting rich with his hit single, which sells for 99 cents per download on iTunes?

“Probably, but that doesn’t matter,” he told the Post. “My goal is to destroy this demonic music industry and bring God back into the culture.”

Brooklyn hip-hop artist HDBeenDope and Earl On The Beat reveal their upcoming project “Side A: The Preface” and a brand new music video